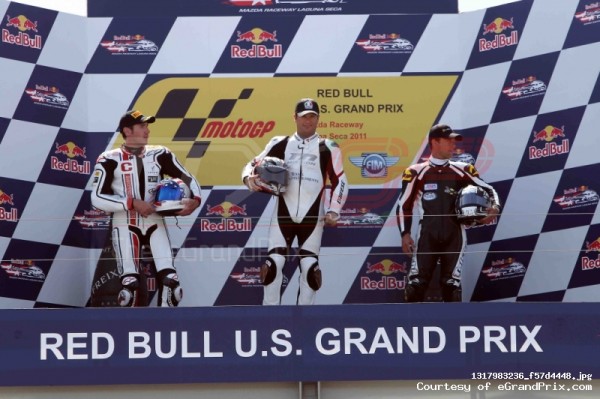 TTXGP announced the North American schedule for 2012 with a great list of venues. Electric racing kicks off at Infineon for the third year in a row and then hits PIR. Both venues are close to many EV manufacturers and enthusiasts which makes for a great atmosphere. The final at Daytona will host electric motorcycle race teams from around the world at a legendary race track. This will be the first TTXGP race at Daytona and the first TTXGP final in the USA.

If you only attend one event this year it’s going to be tough to choose. See the full schedule after the break and visit www.egrandprix.com for more information.

The TTXGP North America 2012 schedule has something for everyone, from major national motorcycle racing weekends to headlining an EV festival the calendar has been designed to offer a broad range appeal to multiple types of audiences in America.

TTXGP is pleased to confirm the following dates and venues for TTXGP North America 2012!

Round 1
MAY 4th – MAY 6th
Infineon Raceway

Infineon has been home to the opening round of TTXGP since inception so we are very pleased to be kicking of the season at one of the greenest tracks in the US. The West Coast Moto Jam weekend is the ultimate 2 wheel fiesta; As well as TTXGP fans will be treated to six AMA Pro Road Racing main events on the road course, Supermoto USA on the karting track and FREE Demo rides in the expanded Motorsports Midway. Ticket are available right now: Book tickets online or by phone: 800-870-RACE (7223)

The award winning City of Portland; often been referred to as one of the most environmentally friendly or “green” cities in the world and this summer adds to these credentials when it plays host to the region’s first zero carbon race series. The TTXGP race will be the highlight of an EV bonanza with displays, demos and making up the OMRRA EV Festival.
For over three decades, the Oregon Motorcycle Road Racing Association has run safe, exciting, and competitive events for motorcycle road racers and their fans. Racers range from club level to professionals with national and international experience. The weekend will be actioned packed weekend and if you are in the Portland area it will be one not to be missed! Tickets will be available from the gate; more information to be published shortly – check back here in the next few weeks for a full line up.

Returning to this prestigious track with AHRMA, TTXGP is excited to return the famous Miller Motorsports Park. Mixing the old with the new and showcasing the historic with the future; the TTXGP race will be hosted by one of the biggest associations in the world. The association has grown steadily over the years, now with over 4,000 members; the Miller round represents represents one of its largest and busiest weekends.

Miller Motorsports Park is a state-of-the-art road racing facility for automobiles, motorcycles and karts located just 35 minutes from downtown Salt Lake City in Tooele, Utah. It is considered the finest race track of its type in North America

For the first time in TTXGP History, we bring our World Final to the USA. Daytona International Speedway is the home to nine major weekends of racing activity, featuring everything from NASCAR to the Rolex Sports Car Series to the American Motorcyclist Association and the World Karting Association, as well as the booked for more than two solid months each year for testing and development of various race vehicles. As such offers racers and fans a world class venue and the perfect choice for the TTXGP WORLD FINAL 2012.
“The Speedway is a venue that is known throughout the world as a top-line race track – a place where everyone in motorsports wants to claim a victory,” said Speedway President Joie Chitwood III.